Did you know that food waste in Australian landfills produces the same amount of  greenhouse gases as the emissions of Australia’s steel and iron ore industries combined?1

Composting is a massive opportunity to mitigate climate change and BioBag World Australia director Scott Morton wrote an article for Nourish magazine on this very topic. 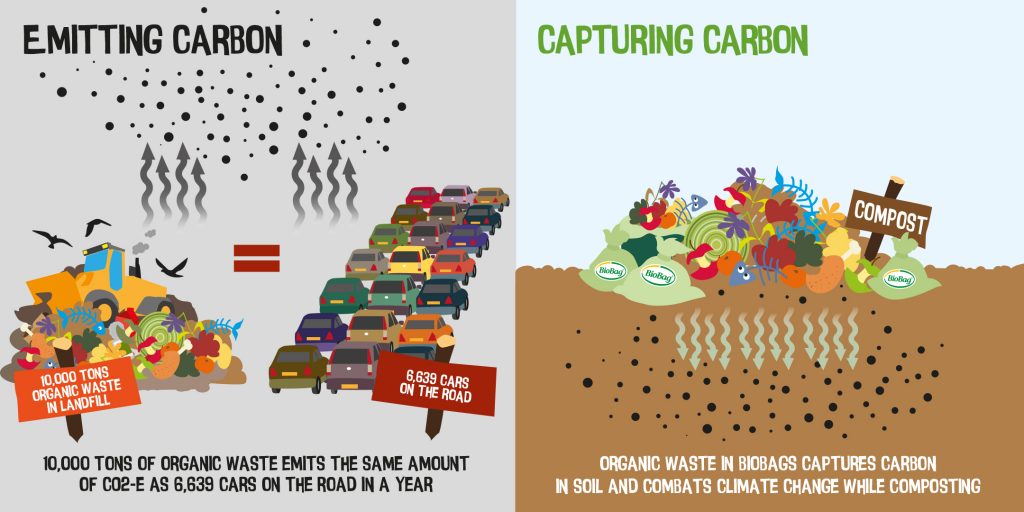 An increase of just 1% of the carbon stocks in the top metre of soils would be higher than the amount corresponding to the annual anthropogenic CO2 emissions from fossil fuel burning.2

Healthy soil can be a major ‘sink’ for carbon – to mitigate the carbon emissions that lead to climate change. See how applying a thin layer of compost adds more carbon to soil in this cool video. 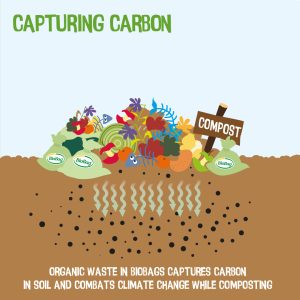 Bushfires have razed an estimated 25 million acres in Australia since September. That’s an area larger than South Korea, and 46% more than the total that burned in the Brazilian Amazon last year.

Gardening Australia’s Sophie Thomson says bushfires affect the moisture content and microbiology of soil and compost can help with restoration.4

“While many people think of soil as an inanimate object, the reality is that soil is a living breathing organism and all fires, regardless of their intensity, have an effect on the soil,” Sophie says.

“All soils benefit from the addition of organic matter such as compost… Adding organic matter to soil improves its structure and dramatically increases the soil’s water holding capacity, turning it into a sponge.

“Incorporating a 10cm layer of compost into the top 15cm of soil increases the water holding capacity of your soil by more than three buckets of water per one square metre. The addition of organic matter also feeds and attracts earthworms and all the other soil microbes, which are the unseen but absolutely essential workers in the garden.”

According to the United Nations’ Food and Agriculture Organisation, 33% of our soil is now degraded and harmed by chemical pollution, acidification, nutrient depletion and other problems.

The combined effects of climate change and soil degradation could reduce agricultural production by half in certain arid areas in the next 30 years. Globally, we need much more organic matter, and properly separating organic waste during waste collection would provide that.4 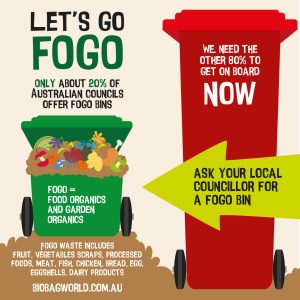 Diverting FOGO from landfill is one of the cheapest global warming abatement options, according to MRA Consulting Group Managing Director Mike Ritchie.

Mr Ritchie says a truck filled with 25 tonnes of Food and Garden Organics (FOGO) can be driven 13,100km to a composting facility before it emits the same amount of greenhouse gases as that same truckload put in a landfill with 45% gas capture (typical of whole of life gas capture).6

So you could circumnavigate Australia (14,500km) with FOGO compared to a standard landfill with gas capture.

If the landfill had no gas capture, you could drive that truck from Sydney to Perth and back 5 times before you generated the same amount of emissions.

If your local council doesn’t offer FOGO bins, here’s some advice on what you can do. And if you want to be part of the solution, take the downsize your bin challenge to ensure less food goes to landfill and more is recycled into compost to nourish our soil.

Check out our 12 Secrets to Home Composting here. Some local councils offer subsidised compost bins to their residents, so ask your local council what they provide.