Millions of plastic produce bags are used in Australia every day to transport shopping home for less than an hour before going to waste.

By using a compostable bag we can do so much better. Significantly more kitchen scraps are captured for composting when compostable produce bags are used to buy fresh food, then bought home to the kitchen.

Research by the Government of South Australia shows BioBags are important tools to collect valuable organic resources so they can be returned to the soil for growing more food in a virtuous cycle. 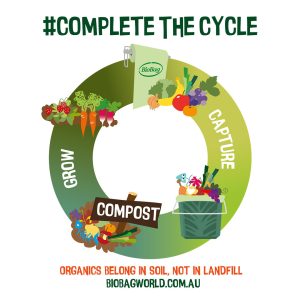 The pilot had overwhelmingly positive feedback from the community and the model was replicated in other supermarkets outside the City of Holdfast Bay.

Bin audits of kerbside FOGO and landfill bins close to both stores were done throughout the pilot and found an impressive 300% increase of food scraps being placed in FOGO bins with the use of compostable bags. 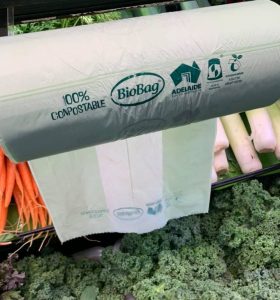 ✔ Grows the circular economy by increasing the volume of organics processed at local facilities.

You can learn more about the City of Holdfast Bay compostable supermarket bags trial on the council’s website.

We’re working on helping retailers transition to compostable produce rolls. In the meantime, Adelaide waste warrior Karen Murphy brings a roll of BioBags to the shops to buy fresh food.

Karen reuses that bag to collect peelings and fresh food scraps that go into her kerbside green bin with food and garden organics. 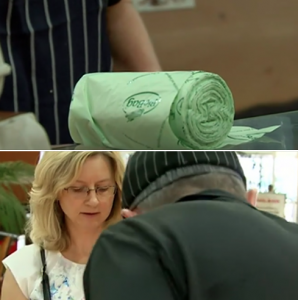 If you don’t have a kerbside green bin that accepts food organics, you can ask your local council for a FOGO bin or compost at home.

Karen was featured an ABC News story that showed how bringing your own BioBags and reusable containers to the shops can help to reduce plastic waste.

Our 8 litre roll of BioBags are the perfect size to take shopping for fresh food including fruit, veggies and bread.

Our compostable produce rolls are also available by the roll of 250 bags. They are certified home compostable and Australian made.