Did you know Australians are the second highest producers of waste per person in the world after the USA and each of us send over 690kgs of waste to landfill annually? The amount of rubbish sent to landfill each year in Australia is enough to cover the state of Victoria.

We can’t carry on as we are – something has to change. We need to find more effective ways of doing things. We need to recover valuable resources like organic and plastic waste so we can maintain those resources at their highest value.

Organic waste contains valuable resources that can’t be recovered from landfill, yet that’s where 87% of Australia’s food waste ends up. We need to recycle organic waste to fertilise Australian soil instead of dumping it in landfills where it contributes to climate change by producing harmful greenhouse gases.

There’s no such thing as waste in nature. Organics belong in our soil, not in landfill, and FOGO bins are the best way to recover organics from landfills. FOGO must become the standard waste service for all Australian households.

Farmers need high quality organics to fertilise their land, not landfill. We have the most degraded soils in the world in Australia caused by wind erosion, water erosion, soil fertility decline, soil salinity and soil acidification.

We can all help by composting at home and asking our local councils for Food Organics Garden Organics (FOGO) recycling bins if we don’t already have one. Only 20% of Australian councils offer residents a kerbside collection service for organic waste. You can help increase this number so Australia can recover more valuable organic resources.

We’re a nation drowning in plastic. Much of it is being stockpiled and sent straight to landfill where it pollutes the environment for hundreds of years. No plastic should be sent to landfill because it’s a waste of a valuable resource.

Plastic bag recycling rates are even lower at only 3% in Australia. The rest are going into landfill or, even worse, contaminating machinery that sorts recyclables and entering the environment. If business continues as usual, by 2030 the amount of plastic pollution on the planet is expected to double with oceans most visibly affected.

Sorting our waste correctly is critical.

Plastic bags cannot go into normal recycling bins. We now have soft plastics recycling programs for all scrunchable plastic including food packaging and cling wrap. But taking soft plastics back to major supermarkets for recycling should be a last resort. 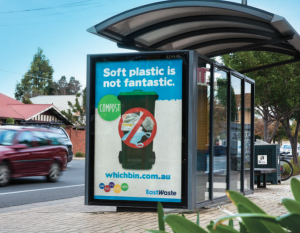 We can’t use recycling as an excuse for not reducing our waste. We need to bring less soft plastic into our homes, buy in bulk and avoid single serve packaging.

Plastic production is predicted to increase by 40% by 2030 at current levels of consumption. Since 2000, the plastics industry has produced as much plastic as all the preceding years combined.

The most prevalent plastic waste management systems are landfilling, incineration and dumping. Industrial incineration is used to treat 15% of plastic waste globally, which releases 2.7 metric tons of carbon. Unmonitored, an incineration-lead waste-to-energy approach to plastic pollution risks creating other issues for nature and society beyond carbon dioxide emissions. The likelihood of this outcome is a concern given varied regional environmental regulations and incineration plant performance, coupled with incineration capacity predicted to grow by 7.5 per cent a year until 2023 in Asia.

Globally, only 20% of plastic waste is currently collected for recycling and less than half of that is actually recycled in Europe due to high levels of contamination.

3. Reduce, sort and recycle all the usual materials

Continuing to separate and recycle the usual recyclables is extremely important even though 50% is the amount we are currently recycling in Australia.

Check with your local council for what you can put into your regular kerbside recycling bin. Cash in glass, plastic and cardboard drink containers via the container refund scheme if you have one in your state or territory. Queensland and New South Wales have joined South Australia, ACT and NT offering 10c per container.

4. Line your bins without plastic

Lining your bins with a BioBag is much better for the environment because it creates less carbon emissions and leaves no microplastics behind, reducing the damaging effects of plastic on the planet.

Our number one goal is offering an alternative to plastic bags. If we can divert just one gram of plastic away from landfills then we’re happy. Even if it doesn’t make it into a compost bin, a BioBag is still better for the environment as a whole because it won’t break down into microplastics and leave toxic residues.

Use this handy guide to work out which size BioBag is right for you.