‘Break Up With The Bag’ is a sustainable community project by Adelaide-based Jemma van den Bos and her team participating in the City of Adelaide Community Leaders in Sustainability program. 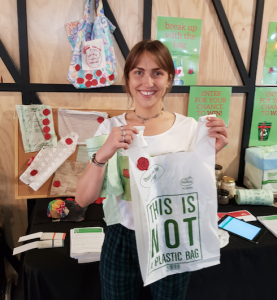 Jemma from ‘Break Up With The Bag’

“Our team’s vision is to reduce plastic bag use in the Adelaide Central Markets by educating shoppers and stall holders on plastic free alternatives such as calico carry bags and compostable produce bags made by BioBag.

“Even though we’ve had a plastic bag ban in South Australia since 2009, it hasn’t stopped people from using plastic bags.

“Banning plastic bags is a step forward, however I believe the ban should be inclusive of all forms of plastic bags. Retailers and consumers also require support and education to make the transition because behavioural and cultural change is key.

“The focus of our project at the Adelaide Central Markets was to see if raising consumer awareness about replacing plastic bags with more environmentally friendly alternatives would lead to a consumer-driven campaign.

“After engaging retailers we found they have their own change barriers and at the end of the day it comes down to business and economics. The Adelaide Central Markets is keen to hear about the  results of our project, so hopefully we can make a positive impact in this space going forward.

“Although our project scope focuses on bags specifically, more generally I would like to see people reviewing their plastic use holistically and working to reduce this. Plastic Free July is coming up which offers everyone a great opportunity to start their plastic-free journey,” said Jemma. 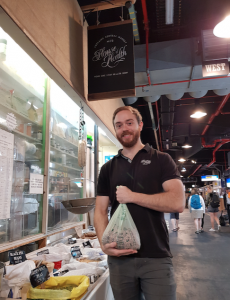 Robert from House of Health at Adelaide Central Markets

“I support the push to change consumer behaviour but we can do it with a compostable product to immediately stop the introduction of more plastic into the environment. Emerging technology is making compostable bags an increasingly viable alternative to plastic bags, so we have no excuse. Composting recycles organic waste which reduces harmful greenhouse gas emissions, saves water and conserves landfill space.

“We live in an era when plastic is a global problem of incredible proportions and we also live in an era of convenience. Today, we don’t have to compromise convenience because with compostable bags we can have both.

“BioBags are made from renewable organic matter and their strength is improving all the time. We are supplying a long list of shops and online stores and the demand is increasing because our customers want to make greener choices and do their bit for the environment.

“Compostable is the best end of life option for a bin liner, ziplock bag, dog poo bag or carry bag because it breaks down into organic matter without toxic residues.

“Some bags labelled ‘green and degradable’ can be misleading because they’re just plastic bags with chemicals added so they break down faster. It’s easy to label something as ‘degradable’ or ‘biodegradable’, but these terms don’t mean anything unless proven by a performance standard like Australian Standard AS4736. 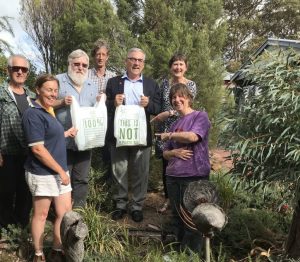 “Only with this certification can consumers can be sure the product will biodegrade in an environment where microorganisms are active. No oxo-degradable or other fragment-able plastics that incorporate additives into standard plastics have met the requirements of Australian standards or similar global standards,” Scott said.

Bin liner sales increased by 80 percent after South Australia banned single use shopping bags in 2009 and 9 out of 10 households continued to line their bins with plastic bags, according to a 2012 review into the Plastic Shopping Bags Act 2008.

Pictured: Jemma van den Bos engages shoppers at Adelaide Central Markets as part of a community project called ‘Break Up With The Bag’.