Plastic may be cheap but the economic and human health effects are costly. 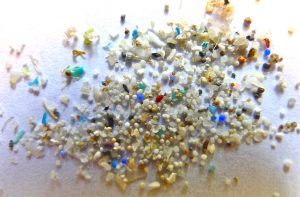 Of the 300 million tonnes of plastic produced each year globally, only 9% is recycled and the remaining 91% enters the air, land and water as waste.

Plastic breaks down into microplastics up to 5mm in diameter and you can be sure you have plastic in your body.

Extensive research confirms we are ingesting microplastics and a recent study found microplastics in fish liver, suggesting particles can get from digestive tissues to other body parts.

Latest research shows tiny plastic particles end up in our lungs where they stay or enter our blood streams. Children are most at risk because their respiratory systems are still developing and babies who crawl on the floor are the most vulnerable. 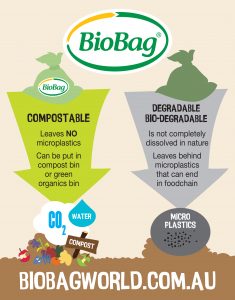 Adding to the problem of microplastics are ‘degradable’ plastic bags designed to break down faster into small plastic particles. Technically called oxo-degradable, these bags are made from regular plastic with metal salts added so they degrade much faster in the presence of oxygen.

Instead of degrading into harmless residues, degradable plastic fragments into tiny pieces that contribute to microplastic pollution.

Microplastics in our food and drinks

Fish, shellfish and sea salt are known to contain microplastics, but other foods and drinks we ingest could be more worrying.

Microplastics in the air we breathe

Of even greater concern is new research that shows we’re breathing in microplastics, especially indoors. Concentrations of microplastics are greater indoors than in outside open air.

A recent study estimated almost 70,000 microplastics enter our bodies annually from the dust that settles on our dinner.

It’s not yet clear exactly how inhaling microplastics affects our health. But experts say what makes microplastics particularly harmful is they carry other airborne pollutants into our lungs and bloodstreams. Microplastics found in lung tissue also indicate they’re bio-persistent, meaning the body can’t rid itself of the inhaled plastic particles. Scientists say these microplastics can lead to cardiovascular and cerebrovascular diseases, induce cancer and impact the immune and nervous systems.

Funding for research is limited and we can’t wait for scientists to provide complete answers before taking action.

Reducing microplastics in your home

You can minimise plastic in your home by avoiding degradable plastic bags, steering clear of glitter and cosmetics containing microbeads, and choosing fabrics made from natural fibres instead of synthetics like polyester. 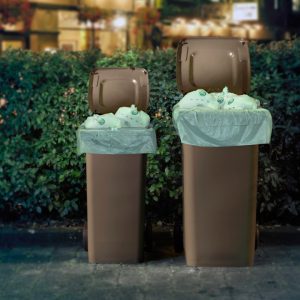 Research on lining your household bin shows using no liner or newspaper isn’t as environmentally friendly as you might think. Choosing a BioBag bin liner is much better for the environment as a whole, even if it goes to landfill.

Be aware of the misleading labels ‘degradable’ or ‘biodegradable’ because these terms don’t mean anything unless proven by a performance standard like Australian Standard AS4736. Only with this certification can you can be sure the bag will biodegrade in an environment in which microorganisms are active, including the soil and the sea.

BioBags help prevent plastic pollution because they completely disintegrate on land within 6 months and in the ocean within 2 years, leaving no microplastics or harmful residues.

The real costs of plastic to our economy:

World Economic Forum – Are you breathing plastic air at home?

AccuWeather – Most of the indoor air we breathe is polluted with microplastic particles.

The Conversation – You’re eating microplastics in ways you don’t even realise.

The UNEP (2014) Report, Valuing Plastics: The Business Case for Measuring, Managing and Disclosing Plastic Use in the Consumer Goods Industry.

The New Plastics Economy – Rethinking the future of plastics.