South Australia has more than 40 councils offering residents kerbside green bins for recycling food organics and garden organics (FOGO). As a national FOGO leader, the South Australian Government has invested in extensive research on how to maximise the amount of food waste in their kerbside FOGO bins. This research was summarised in a FOGO business case by Green Industries South Australia (GISA) and concluded: 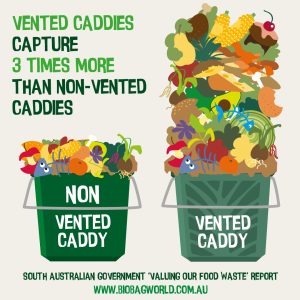 “It is possible to introduce co-collection without provision of compostable bags but not recommended. Such a system is likely to have less householder acceptance and consequently participation and diversion rates are likely to be considerably less. It is also likely to lead to some householders using plastic bags to dispose of food waste and therefore lead to significant problems with contamination of collected and processed material.”1

New machines have been installed at BioBag’s Adelaide factory and thanks to the support of the South Australian Government, we can now make kitchen caddy liners here in Australia.

The same Government of South Australia report shows the additional cost for co-collection of food waste commingled with fortnightly garden organics collection (based on existing 3 bin or split 2 bin system) but without use of compostable bags.

“These systems (without use of compostable bags) have been trialled elsewhere in Australia and result in lower yields of kitchen waste diverted and complaints about odour and cleanliness in the kitchen.

“There is also an increase in contamination that results from residents using plastic bags to maintain cleanliness of the kitchen container and for ease of handling the kitchen waste.

“Under this system food waste diversion is assumed to be only 1kg instead of 1.5 kg per household per week because it is less convenient.”1

South Australian councils joined the largest residential food waste pilot study of its kind in Australia in 2009–2010 undertaken by then Zero Waste SA (now Green Industries SA). The ‘Valuing Our Food Waste’ report was published by the South Australian Government in 2010.2 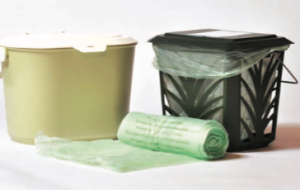 The goal was to identify factors that contribute to the greatest diversion of food waste from landfill. The pilot tested outcomes using a kitchen bench top, vented compost caddy lined with compostable bags to collect food waste versus using a non-vented, unlined caddy.

The sample consisted of 1,130 households from 10 participating council areas. Sampling was based on the same households for each suburb in each kerbside audit for the FOGO waste stream in each area sampled.

Two kerbside audits of organics bins were conducted, one before the pilot started in Spring 2008 and another in Autumn 2009. The audit included visual inspections of bins and separate collection of FOGO bins with delivery of the contents to undercover sorting sites. Data collected from each audit summarised the contents to reveal whether the vented or non-vented caddy was more effective. 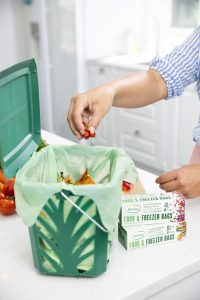 The pilot’s overall findings were:

Vented caddies save $$ for councils and rate payers. 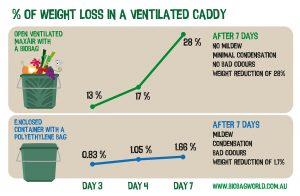 Adelaide councils save 85% by collecting food and garden waste in FOGO bins instead of landfill bins. Councils could save even more if householders use vented kitchen caddies lined with BioBags to collect food scraps for FOGO bins.

That’s because food scraps lose 17% of their weight after 3 days in a BioBag-lined, Max Air vented caddy due to water evaporation. And they lose 28% after 7 days. The ventilation prevents odours, mildew and condensation which also increases householder opt-in rates. Learn more on our blog on how vented caddies cut smells and costs for councils.